Anders Wahlstedt Fine Art is honored to show six prints from the Circuits series by Frank Stella. An Artist Proof of the astonishing work Pergusa Three, perhaps the most celebrated print the artist has ever made, will be included.

The Circuits prints are relief prints, the consequence of relief-printed woodblocks variously combined with relief- and intaglio-printed etched plates, some of which, notably in Pergusa Three, were embedded into the woodblocks. Created from the residue of the Circuits paintings, these prints reveal a passion for unorthodox materials and techniques. Combining oversized handmade paper, diverse printing processes and innumerable runs through the press, the multimedia Circuits prints convey a sense of recklessness and speed befitting their title. At the same time, they reflect a technical virtuosity that represents the highest achievements of printmaking in the 1980’s.

The Circuits prints are related to the world of automobile racing. Titles such as Pergusa, Talladega, Estoril and Imola all refer to racetracks in North America, South America & Europe. The color stained handmade paper used complicates the color play and heightens the ambiguity of space. The artist stained some sheets in multicolored all-over patterns. Stella has said, “I think the paper comes first and then the ink and then the force of the press.”

There is a long-standing argument in the history of art criticism between interpreters, who spin personal fantasies before an image, and formalists, who only describe and account for the interaction of color, shape and line. This tradition continues today in the various ways we are asked to ‘read’ abstraction. In the Circuits prints, there is no reason to feel at odds with the literal associations of the speed track and with the sheer delight of compelling color and pattern for their own sake.

Frank Stella was born in Malden, Massachusetts, in 1936. He attended Phillips Academy, Andover and then Princeton University, where he studied art history and painting. He is the only living artist to have had two retrospectives at the Museum of Modern Art, New York, in 1970 and 1987. Since then, Stella has been the subject of countless exhibitions throughout the world. Frank Stella had his first print retrospective in 1982, which traveled to fifteen different American museums over a four-year span. He had a major retrospective of his work earlier this year at the Whitney Museum of American Art, New York and currently has a print retrospective on view at Madison Museum of Contemporary Art, Madison, WI. A complete catalogue raisonne of Frank Stella’s prints has just been published in conjunction with the present retrospective.

Frank Stella Circuits Prints will be on display from May 19th to June 18th, 2016. There will be an opening reception on Thursday, May 19th from 6-8PM. The artist will be present. 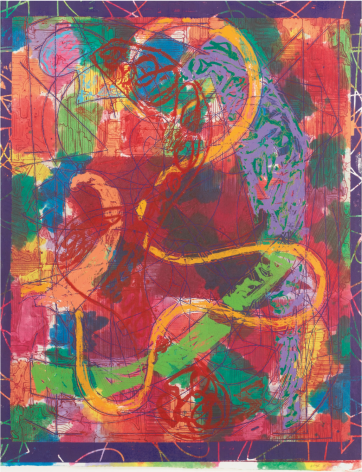