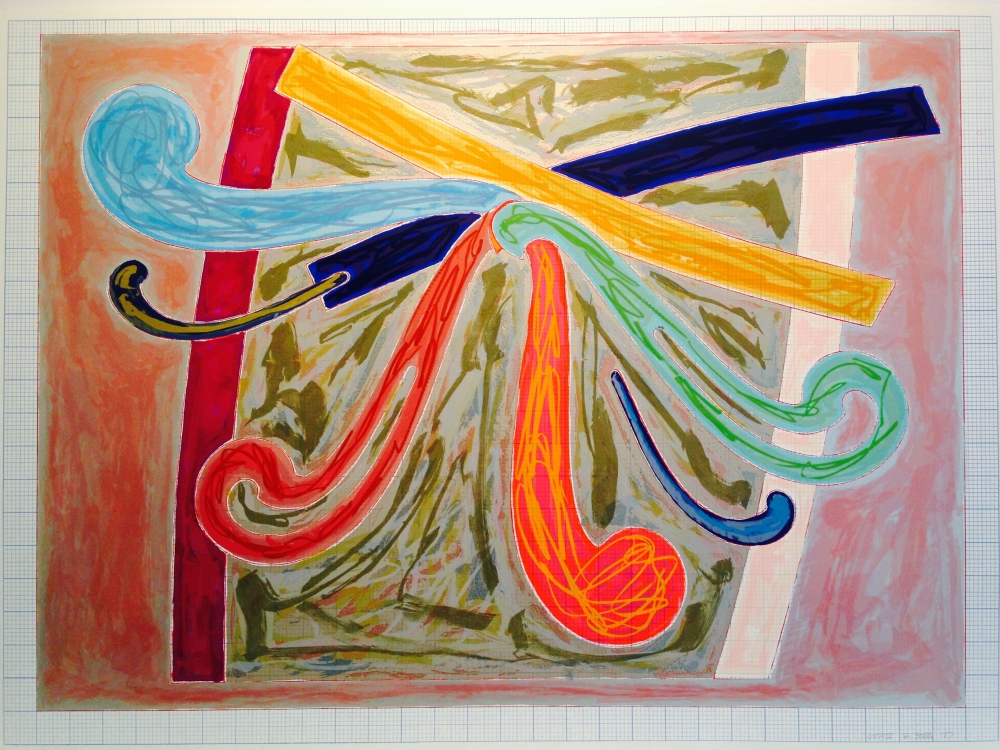 The free transportation of imagery from painting to print involved alterations in color, finish and the addition of a graph-pattern background upon which the rectangular compositions are placed. Although these prints were the first to emerge from a metal-relief series, they are perhaps more directly related to the affiliated small-scale, flat, mixed- media paintings that incorporated graph-pattern backgrounds. The prints and the paintings of the Exotic Bird Series were developed concurrently. The Exotic Bird Series marks the first instance of an active merging of lithography and screen printing, the use of glitterflex, (paralleling similar textures in the paintings), and the adoption of liquid tusche to create lithographic washes. The Exotic Bird Series were published by Tyler Graphics and printed by Kenneth Tyler, John Hutcheson and Kim Halliday. We are especially pleased to be able to exhibit a working proof with extensive hand coloring in different media added by the artist.

Frank Stella was born in Malden, Massachusetts, in 1936. He attended Phillips Academy, Andover and then Princeton University, where he studied art history and painting. He is the only living artist to have had two retrospectives at the Museum of Modern Art, New York, in 1970 and 1987. Since then, Stella has been the subject of countless exhibitions throughout the world. He also had a major retrospective of his work in 2012 in Wolfsburg, ­­Germany.

Opening on October 30th, 2015, the Whitney Museum of American Art will host the most comprehensive retrospective of the artist work in the U.S to date. The exhibition is organized in collaboration with the Modern Art Museum of Fort Worth.